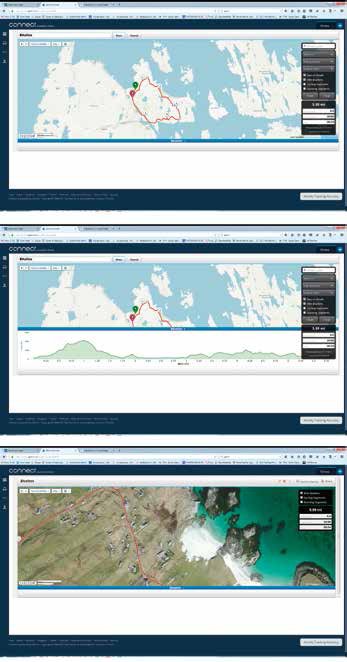 Importing to a Garmin is fraught with pitfalls

Once again the absence of OS level of detail is frustrating. Neither the coastguard road nor the road down to the pier are marked – the map remains 'clunky' at all zoom levels. The satellite view was, however, very good, although manipulating a path initially crashed the system. Using this view we managed to plot a route down the road which was plainly visible on the satellite view.

Overall the behaviour of the 820 (which is, after all, one of Garmin's top-of-the-range models) has done little to enhance the reputation of the company around these parts. It is as clunky as their nearly unusable car satnavs. The presence of free alternatives for plotting routes is an indication of just how idle the Garmin coders have become; they are totally outmanoeuvred by the amateurs working on the open source OSM plotters. If only it worked , nothing would compete with the efficiency and ability of BikeHike in terms of user friendliness (and it has been shown to work [in limited circumstances] even by ourselves!).

You might reasonably expect to create a course in an external app such as BikeHike and then import it to your Garmin account. It makes all the right noises and even says, 'your file has downloaded'. However, it is not present or even viewable within Dashboard.

Overall Garmin is in the position that Quark XPress occupied some years ago – everybody used it, everybody loathed it. They would do well to take a hard look at their software before the GPS equivalent of Adobe InDesign arrives to demolish their leading position.

Despite these serious reservations, the Garmin performed reasonably well in the field both walking and cycling. It is actually quite straightforward to use as a recording device despite the obscure way the instructions describe the procedure (you turn it on, tap ride and then the start button – how complicated can you make that?).

You can at least check that there IS a beach where Gallagher says there is!

You can also check on how much uphill waliking or climbing you are in for.


Please Note:
There is more than one page for this Article.
You are currently on page 10 Contact Mike McNamee