The two must have been ordered to move apart from each other and turn away from the soldiers. One lay down on the ground, and soldiers swooped forward to restrain him while their colleagues kept their guns trained on the other. The second hijacker was then approached, quickly restrained, searched and pulled to the ground. The four-hour standoff was over.

All that remained now was getting the images out to the world. The internet still wasn’t working. I had to make a judgement call. While I needed to get this pictures to the agency without further delay, I knew that if I left, I might (and in fact did) miss a good shot of the special forces soldiers embarking on the plane to conduct a full sweep of it. A quick phone call to Paris to discuss with my editor settled it. I would leave. I switched the cards in my cameras, just in case I came across another police officer who’d have decided to be funny with me. That was unnecessary as it turned out but it’s better to be safe than sorry. Once I got to the car and drove off, it didn’t take long to find an area where I could get a good 4G signal, so I pulled over and filed the images which my editor quickly edited, cropped very tightly in some cases, and sent out to our clients. In news situations, the picture quality sometimes comes second. What’s important is the content. So while many of the pictures didn’t look particularly sharp because of the heat haze from the ground and the tight cropping, that didn’t matter at all. No one else had the content I had. 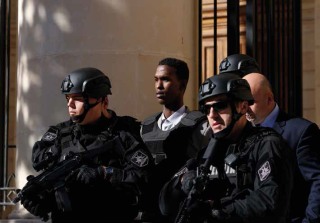 were harmless replicas. Luckily, all went well without a single shot being fired and no one getting hurt – a far cry from the last hijack to take place in Malta, during which some 60 hostages were killed when an assault on the Egyptair plane by Egyptian commandos went horribly wrong.

Definitely one to remember, as far as the first day on the job goes.

I followed up the story a couple of days later. According to Maltese law, a person cannot be held under arrest for more than 48 hours without being arraigned and charged in court. So once Christmas Day morning dawned and they still hadn’t been taken to court, I knew the chances were that Christmas Day lunch with the family may get messed up. And sure enough, it was, to a degree. The hijackers were taken to court in Valletta around noon. The police made a point of making a show of it all, having several heavily armed SWAT police officers in a main square on Valletta’s main street, as hundreds of tourists and locals looked on. Why they didn’t use the more discreet and safer back entrance remains unexplained, but it did make for good pictures and gave the media scrum plenty of space to work in.


Please Note:
There is more than one page for this Article.
You are currently on page 5 Contact Darrin Zammit-Lupi