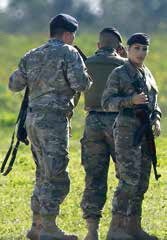 I made my way down the country lane to where I figured I’d have a decent view of the plane. As soon as I got there, a police officer appeared and gave me and another photographer our marching orders. Trying to reason with him wasn’t going to get us anywhere – he had his orders and he wouldn’t budge. No worries, we’d walked past a couple of farmhouses on the way in – I was certain the owners would let us onto their roofs if we asked politely. Within a couple of minutes, we were setting up on a rooftop. The angle was good, we were at a safe distance even if the plane did blow up. I was much further away than I had been before, so I fitted a 2x extender to my 400mm lens.

It wasn’t long before the same police officer came down the lane, ordering us to leave. Of course, I stood my ground. I know my rights in these sort of situations – I was on private property at the owner’s invitation. Even if there was a safety issue, I was under no obligation to comply with the order, even though he said it came from the highest level. What set alarm bells ringing in my head was that he was only ordering the guys with the cameras to leave – he was quite content to leave the farmer and his buddies there. So someone somewhere simply didn’t want pictures and footage to be shot. He asked for my particulars which I shouted out to him from the rooftop, I took note of his service number, he got on his phone and walked away. He didn’t bother us again. Some soldiers tried something similar, but we ignored them too. They do this sort of thing sometimes – it intimidates less experienced journalists who might not be too sure of their rights so they think it’s worth a try. 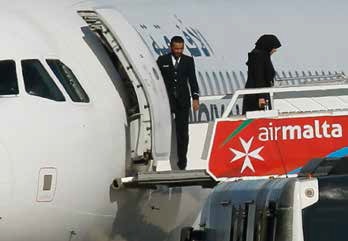 I shot a couple more video clips, then quickly edited all the footage I’d shot so far, called the TV editor in Rome and transmitted the edited clip. Before long, it was playing on major TV networks worldwide.

One of the owner’s friends was listening to radio conversation between the pilot and the control tower so we had a pretty good idea of what was going on. We were able to ready ourselves for the first disembarking of released hostages – women and children first, as always. Passengers were disembarking in pairs. Everyone seemed remarkably calm. You’d never have imagined they’d just been through a hijacking experience. Two female crew members were also released by the hijackers. I managed to get some pictures of the disembarking passengers, but then lost the mobile internet signal. The farm owner told me it comes and goes in that area and was very unreliable. I was unable to get it back as the story unfolded to its conclusion. A few days later we learnt that the security services purposely disabled some mobile phone transmitter towers in the area. I’m still not sure why.


Please Note:
There is more than one page for this Article.
You are currently on page 3 Contact Darrin Zammit-Lupi