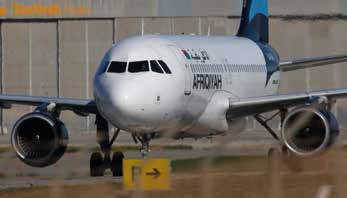 The plane had been on the ground for about 20 minutes. The important thing in these sort of situations is speed. Getting the first few pictures out on the wire as quickly as possible is paramount. I shot a few frames, starting wide to get the whole plane in, and then switching to a longer lens with an extender to shoot tighter images. Using the wireless transmitter on my Canon 1DX and a Mi-fi unit (which is basically a mobile wifi hotspot), I was able to send some pictures straight to an editor in Paris, who quickly edited, captioned and sent them out on the wire from which they could be retrieved by a network of thousands of clients worldwide. Within minutes the first pictures started appearing on news websites all over the world. That capability is essential for any wire services photographer – it enables the photographer to concentrate on taking pictures instead of having to stop shooting, switch on a laptop, download, and then select and file pictures. I also shot some video clips on my DSLR for our TV clients, as my Reuters TV colleague hadn’t reached the location yet.

The traffic police officer who’d earlier waved me through the road block turned up on his bike and said he’d made a mistake by allowing the media through, and that we’d have to pack up right away and leave, as we were too close (he claimed) for our own safety. Fair enough – the hijackers were threatening to blow up the plane, and if that did happen, we might have been taken out by flying shrapnel.

We stalled as long as we could – the national TV broadcaster team were doing a live link and they begged to be allowed to wrap it up instead of interrupting it. That gave us an extra five minutes on site.

As my images were being transmitted, I took a few calls from journalists at Reuters and the BBC, and then quickly looked up some information on what was actually happening – The Afriqiyah Airways A320 with around 120 people on board had been hijacked in Libyan airspace. The plane was on an internal flight from Sebha to Tripoli when it was diverted by two hijackers, believed to be in their mid-20s, who were threatening to blow up the plane. A total of 111 passengers – 82 men, 28 women and an infant, all believed to be Libyan – and six crew members were on board the aircraft.

Once back in the car, I knew where I should head to. I’d once done a bit of a recce around the airport with just this sort of situation in mind. Once I got there and parked, I decided to carry all my gear and warm clothing with me. I knew that once I found a good spot to shoot from, I’d be unable to leave till the whole thing was over, both because I couldn’t risk missing some major development and because access might then be blocked and I’d be unable to return. I’ll worry about food and water later, I told myself, while hoping it would all be resolved quickly and wouldn’t drag on for two or three days.


Please Note:
There is more than one page for this Article.
You are currently on page 2 Contact Darrin Zammit-Lupi