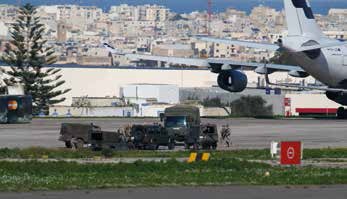 One surreal fact struck me. To the left, not far from the area where the military were stationed, was the film set of the movie Entebbe dealing with the infamous 1976 hijacking of an Air France plane to Entebbe, Uganda, which resulted in the Israeli Defence Force mounting one of the most daring rescue missions of all time. Shooting on the film set wrapped a few days ago – though already being dismantled, one could still see signs reading “Uganda welcomes you.” But the Maltese soldiers were just a bit too far away for it to make an interesting juxtaposition in a picture. (There’s further irony in the fact that the film was being shot in Malta – the first movie about the hijack, which was made shortly after the actual event, was banned in Malta for several years for purely political reasons.)

The chap who was able to listen to the tower conversations decided it was time for him to leave, so we no longer had any information on what was happening on board the aircraft. We just had to keep our eyes and lenses trained on it constantly. We had seen a couple of crew members come out of the plane onto the top of the staircase, but suddenly a man we hadn’t seen before appeared, waving a green flag. We knew all the passengers had disembarked, he wasn’t a crew member, and was waving what looked like a Gaddafi-era flag. Therefore, we quickly concluded the odds were he was one of the hijackers. So far, this was the money shot. I had the pictures, but frustratingly, repeated attempts to transmit the pictures kept failing because of the intermittent signal.

We saw military armoured vehicles on the move, approaching the aircraft. These were heavily armed special forces soldiers of the recentlyset- up Special Operations Unit of the Armed Forces of Malta. They drove out of our line-of-sight but it was clear that something was happening.

A few minutes later, the remaining crew members started descending from the airplane. One of them carried the same flag the hijacker had been waving earlier. The crew members moved off to the side, and the two hijackers came out, slowly and calmly walking down the steps. At the bottom, one went down on his knees. The other, the one we’d seen earlier, stepped forward, first put his pistol on the ground and then placed what looked like a document folder on the ground, and then dropped to his knees while holding his hands up. Soldiers crept into my field of vision, cautiously approaching the two terrorists. I pretty much kept my finger on the shutter button, rattling off several frames.


Please Note:
There is more than one page for this Article.
You are currently on page 4 Contact Darrin Zammit-Lupi