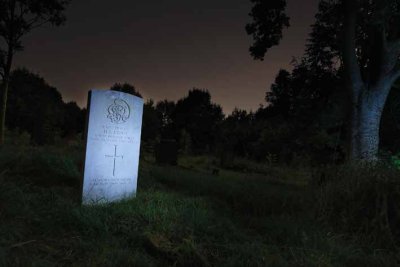 Gravestones are inevitably permanent reminders of not just a person’s life and death but also of the accompanying heartbreak and loss.

What many graves indicate is the trauma of death not only to the person killed but also to those left behind. This headstone actually marks a double grave. The original person interred is Private HE Cruise who lost his life on 26 January 1917, aged 37.

Families were able to add inscriptions to the headstones at a penny per letter.

However, this stone was left blank for 53 years until 16 May 1970 when his wife, Millie, was interred with him.

At this point she was 88 years of age making her 35 when her husband died.

One can’t help but wonder what it must have been like for Millie to lose her partner at such an early age and to wait all those years to be reunited with him.

You can’t help but wonder what her life must have been like, how she coped with bereavement and the loss of her companion. How the loss of a significant proportion of men must have affected all women of that generation.

The economic impact must also have shaped her life considerably. A War Widow’s pension in 1917 was a pound a week. Quite a generous sum in 1917.

However, it stayed a pound a week until 1973, three years after Millie died.

How did she cope with this as she lived on without her life companion? Were there sons and daughters she could turn to? Are there family still out there who have memories of her?

The headstone is lit by a full moon with an exposure of 156 seconds at f8 at 200 ISO. As in many of these images the light in the background is light pollution from Bristol City centre and beyond to the M32.


Please Note:
There is more than one page for this Article.
You are currently on page 7 Contact Marko Dutka