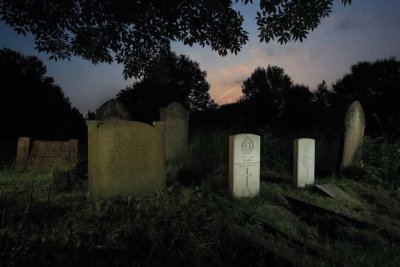 The photographs are not meant simply as a record of the graves but rather as a means of comparing and contrasting the fate of those buried with our own lives.

This image is of the graves of WC Poole and W Cox.

In the foreground of this image the grave has been lit by artificial flash. It enables me to under-light the background and bring out the texture of the sky. This image was photographed at sunset in mid-summer. Any activity in the sky is also more obvious. In the centre of the image is a plane trail. Modern technology has provided me with a phone app called Plane Finder. Using this I can track in real time all commercial planes airborne at any given moment throughout the world. Not only does it show the plane’s flight-path but also its place of departure, its plane number and its destination. The plane in this image is heading to Alicante taking passengers primarily to Benidorm.

As with my phone app, the technology used by the commercial jet airliner was once of huge military significance. Now we use it to fly to distant locations and to keep track of them as they do. Once we could have been flying to our deaths ,now we fly to sun, sand and sangria.


Please Note:
There is more than one page for this Article.
You are currently on page 5 Contact Marko Dutka