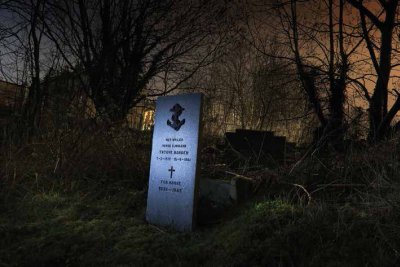 In the 1980s Arnos Vale Cemetery had fallen into disrepair and was threatened with development.

Fortunately a group of far-sighted people realised the immense significance of preserving the cemetery and after a long and hard-fought campaign it was saved in 2003 and the Arnos Vale Cemetery Trust was set up to preserve and restore it.

The cemetery is still very overgrown in areas, which provides a significant haven for wildlife. During the winter the foliage recedes and many graves that are normally covered in bushes re-appear.

One such is the grave pictured here of a Norwegian seaman located just off the top plateau of the cemetery. His name was Trygve Borgen and you can see from his gravestone that he was just 19 years old.

In Norway, as in most Western cultures, the tradition, whenever possible, is to be buried with or as near as possible to your family.

In our modern culture with families spreading across the globe this tradition is no longer as easily maintained. In the case of this young man, the Second World War separated him from his relatives and he is buried a long way from home.

However, the phrase just below the anchor - Her Hviler means 'Here lies the family’s roots' - essentially this is the family grave.

Even though his mortal remains are a long way from home, the phrase indicates that he is still considered part of his family and that he, if not his body, is still at home.

Small but significant things like this that mean so much are just some of the many items only too easily lost when profit is placed before feeling.


Please Note:
There is more than one page for this Article.
You are currently on page 6 Contact Marko Dutka