Dog food was an issue, they chomped their way through two enormous sacks of dried food (standard 1 cwt-size sacks!) and still returned home slightly lighter. This alone made unsupported walking a non-starter as it was a rather scarce, special mix of doggie food available from the vet. The behaviour of the dogs was very interesting; after two days they had abandoned jumping up and down (and howling) to get out of the car and transferred their antics to getting back in to the car at the end of the day! On return to camp they leapt out of the car, then wriggled straight under the rain flaps of the awning, and sat waiting for food to be presented. 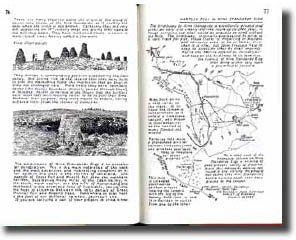 Alfred Wainwright's original book when the Coast 2 Coast was 'born'. Detailed sketch maps, along with anecdotal notes on the scenery and local history, every mile is marked off with an indicator!

The route was followed using a couple of guide books and OS maps. The walkers had two or three sheets each day (a total of 36 sheets used in all) and an identical set was kept in the support vehicle. Route finding was good old-fashioned map and compass; some of the route is clear and obvious, the high tops were shrouded in mist on several days and required quite skilled mountain craft. The rendezvous points were selected to be as unambiguous as possible and were usually telephone kiosks, churches, well-defined road crossings or pubs (the latter being much the preferred choice of the support team). With almost no mobile phone coverage for about 90% of the trip there was no ability to recover from a map error and, at the end of 14 miles, an extra mile of searching is extremely demoralising! One of the findings was that the walkers who were 'in synch', ie doing the same legs each day, got to know each other and sometimes all that was required was to ask if the incoming, faster walkers, had seen Treacle and Fudge recently!

Route finding for driving was almost exclusively performed using Tom Tom satellite navigation, backed by OS maps for the last 50-yard bits. Tom Tom had some funny ideas about which route to take, leading to some very exciting adventures during the day!

Good GPS co-ordinates are available for the route and these can be overlaid on Google Earth using a .kmz file. In the image shown on the previous page the cyan line is the kmz file, the blow-up is a telephone kiosk at the end of Haweswater.

Some rendezvous were impossible to miss, the best, perhaps, being the infamous Lion Inn at Blakey. Standing in total isolation on the Blakey Ridge, this has a wonderful restaurant, but is more famous after staff and residents were trapped for over a week, in December 2010, following a massive fall of snow which drifted to over 16 feet. They were eventually rescued when a JCB literally dug its way up to them, a few feet at a time, to allow the snow ploughs to get to work. You cannot buy the coverage the whole escapade received on national TV!


Please Note:
There is more than one page for this Article.
You are currently on page 5 Contact Mike McNamee