After nine trips up and down Honnister Pass the light eventually came good! This was an early morning shot taken while returning from dropping the girls for the start of their day.

I pondered long and hard about using this feature, mainly fretting that it might seem a little self indulgent, they are after all holiday snaps! I was also struggling to find a commercial angle to the thing. However, a number of correspondents received my terse Blackberry message, "sorry for the delay I am away for three weeks on the coast to coast" and replied showing interest into what exactly we were up to. In truth my initial reply was a bit of a fib because it implied I was walking the Coast to Coast (C2C) whereas it was actually Mrs Editor and her mate Sue, along with her two dogs, Fudge and Treacle. The four-legged terrors are known to regular readers, as they are the official Professional Imagemaker autofocus test targets.

My job in the scheme of things was to keep the girls (all four of them) happy, fed, pampered and transported each day to the start of the leg and then to collect them at the end of each leg. In between times there were camper vans to look after, shopping to do, dishes to wash, bread to bake, meals to prepare and packed lunches to get ready each day.

In the time left over I was trying to make two paintings per day using Corel Painter, get some images and suss out the possibilities of a book. Oh, and a few pages of Professional Imagemaker were written as well.

There are quite a number of long-distance paths in the world. They are characterised by continuous, unbroken trails, usually in quality scenery, the wilderness and, most often, finishing at a different point to the start. The subject walk is the Wainwright Coast to Coast, originally published in 1973 by the Westmorland Gazette and authored by the slightly reclusive (and some would say grumpy) hill walker, Alfred Wainwright (1907-1991). 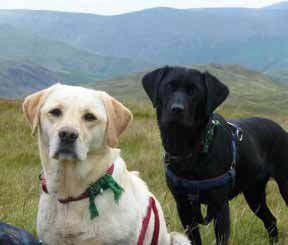 Fudge and Treacle on the high fells of the Lake District

It was recently voted the second best long-distance walk in the world, second only to the Milford Trail of New Zealand. The C2C is officially 192 miles but was recently re-measured at 220 miles (which might explain why the girls arrived late at some of the rendezvous points!). It starts at St Bees in Westmorland and crosses the English Lake District, the Yorkshire Dales (via Swaledale) followed by a yomp across the Vale of Mowbray before climbing back onto the North York Moors, the Cleveland Hills and finishing at Robin Hood's Bay, the other side of England. A number of traditions have developed over the years including collecting a pebble at St Bees then dropping it into the North Sea at the other end. A mandatory pint of beer at the Bay Hotel is a tradition, along with ensuring that you dip your toes (and, in our case, swim the dogs) in the sea at either end.