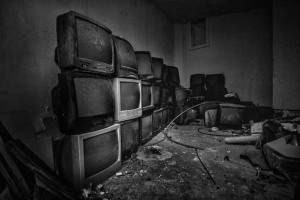 I wandered up to the remains of the hotel's lobby and peered through a hole in the fence that had been made to stop people entering. I was then confronted by a Mexican gentleman, yelling in Spanish at me. I waved my camera in the air 'no espanol' whilst using body language to ask him if I could come in. It was worth a shot. He didn't speak any English and just motioned me to leave.

Obviously I respected him and went on my way. I went straight back to my hotel and did a little bit of research online. It turns out that the hotel was ruined in 2005 by hurricane Wilma and had been left to decay ever since. I found an article which had a good write-up on it and included some photographs of it during its peak. There were a few photos of it derelict from the outside, but nothing from the inside. This made me want to go in even more. The fact that I couldn't find any photos of it derelict from the inside would make it an even bigger reward.

The next day I decided to approach it from a different angle, the beach entrance was wide open, with only a small wall about 4-5 feet high in my way; I waited until dusk and decided to go in that way. Pretty much straight away I was yelled at yet again; I repeated my standard panic and waved the camera in the air. He approached me and spoke reasonably good English. I asked if I could wander about and take some photographs; he said that if I came back in couple of days I could ask the security guard who may be able to show me around. 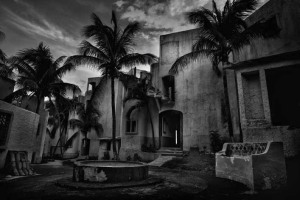 Great, I was getting closer. Over the next couple of days I observed things and something I realised was that the beach sellers seemed to be using it as a base or a shortcut to the main road. There was one beach seller who looked liked Danny Trejo (actor) - pretty scary looking and had previously tried to sell me some cigars and other substances whilst I was on the beach.

A couple of days passed; it was the day before the wedding and if I was going to get in this place this was my last chance. I sat on my balcony overlooking the derelict hotel; it was late in the day and the sun was starting to go down, the light was amazing. I had to go back and check it out, I didn't want my previous attempts to be a waste of time. I headed down to the beach; I could see the Danny Trejo lookalike and a few other beach sellers, I waited around for five minutes and they walked off in the derelict hotel. I could see the guy who had told me to come and see the security guard so headed over to speak to him. He was with a guy holding a sweeping brush; as I opened my mouth he pointed at the guy with the brush and said give him money for beer and he will take you around.

was a little apprehensive as he didn't look like a security guard. I had little cash on me and only one camera with one lens. I thought, worse case scenario I could just leg it.

The guy who could speak English walked off and left me with the security guard; he didn't speak a word of English. I used body language to tell him I wanted to see the stack of toilets. He walked me up into the hotel, pointing up to a second floor. As we walked in and started to climb the stairs, the Danny Trejo look-alike walked out from one of the rooms. My heart sank; I was absolutely buzzing with adrenaline. My mind was racing and fear had a hold of me. The security guard told him I was taking photos and he walked off talking Spanish.


Please Note:
There is more than one page for this Article.
You are currently on page 2 Contact Richard P Walton