Generally, but not universally, the aim of montage is to bring a number of elements together in as realistic a manner as possible. For believable effect there are a number of characteristics that must be correct and balanced across the various elements within a composite:

Most of the above may be used (or abused!) for dramatic or even comic effect. Generally though, lack of consistency in colour, lighting, image noise or sharpness tend to flag poor craftsmanship - they should all be in harmony. False perspective is frequently used deliberately. Very typical are what I call the 'big head shots' in which a cut out head or head and shoulders are used with a sympathetic backdrop, eg a Roundhead set against a ballet re-enactment scene. The perspective of these shots is usually false, sometimes grossly so. Such shots have been successful in the enthusiast competition circuit although they seem to have fallen out of favour in the last few years. 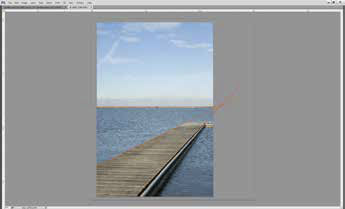 Perspective
Perspective rules are mechanically not artistically based. They can be written down as equations, mapped on grids or calculated by computer. No artistic input is needed to create an accurate illustration of a building. However, an image is a two-dimensional rendering from 3-D scene and so an artistic call sometimes has to be made to create a more satisfying result. Typically this might involve truing up a converging building. If you correct the verticals using say a shift lens then the building looks about to topple over - you might need some residual convergence for realism. This is also what technically correct 3-D perspective calls for, an additional vanishing point for the verticals to converge to.

The two classic texts on the subject of perspective are those of Robert W Gill, published in 1978. My own copies are worth more than £100 if Amazon prices are to be believed! Between them they tell you all you need to know about perspective drawing and accurate shadow generation. By the time you have read and digested them, you may wish you had spent more time getting things done in-camera!