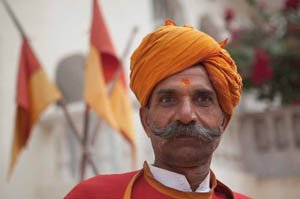 Shooting video on a DSLR rig takes some practice. To emulate a static tripod-based shot you have to frame the shot, record, breathe in and steadily breathe out as you try to hold position. It seems to work about 60% of the time. If you hold it for long enough you can generally find at least 1-2 seconds of stable shot that can be used. Panning and tilting works a little better, and it is relatively easy to get smooth motion. A shot with a moving subject is even better as the eye tends to look at the subject and block out external motion.

I normally recorded video first, followed by stills of the same subject. Although you can grab frames from video for general use they are 1920 x 1080 pixels and JPEG format. This is not enough for stock footage, the images are not always as crisp as you might like and you cannot have portrait layout. Although I much prefer the viewfinder to live view I did get very used to using the loupe viewer with live view to take stills immediately after a video sequence. I was even able to turn the rig on its side for portrait shots. For a one-off shot this is fine, but reverting to viewfinder mode for a series of shots is much quicker. For video I always used manual focus. The loupe gives a large, bright view of the subject and so achieving focus is easy. There was no point is switching to auto focus just to take a still. It was just like the old days with my Pentax 35mm and only manual focus available.

One afternoon in Shahpura we came across a wedding celebration. March is a popular time of year for weddings in India, and everywhere we found weddings in progress. Weddings happen over several days and the buildup involves lots of loud music and dancing. We turned the corner towards the sound and found what looked like an ice-cream van with a DJ inside. Very loud and distorted music was being pumped out and the DJ sang over the top occasionally. A group of about 15 highly decorated women were dancing. I just had my 5D mark II, so took a few stills. But I could not miss the chance to capture some of the sound and colour on video so did a quick manual focus, set the aperture to give a broad depth of field, then started shooting hand held. At first I concentrated on getting some stable shots by using the neck strap as a brace, but then decided to be more adventurous. I held the camera in the palm of my hand and moved around the crowd. Finally I slowly raised the camera over the head of the crowd to get a jib-type shot. When I checked later I was amazed at how stable the shots were - certainly good enough to include in the finished film. 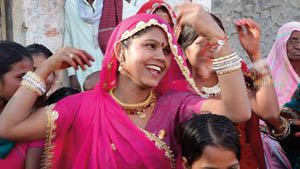 At the wildlife park we encountered all sorts of animals, most of them only within range of a 400mm lens. Still shots in bright daylight with an IS lens are quite reasonable, but hand-held video is tricky. There being no space in the back of the jeep I simply balanced the lens on the side rail and managed stable footage. There was also only room for one camera, so no choice but to make the best of one long lens.

In order to complete the video I needed some guaranteed stable shots, various cutaways and some commentary to camera. This was all done on a tripod, usually around the hotel and using a separate microphone.

People photography is such fun in India. The concept of personal privacy is not well known. On the contrary, people just invite you to photograph them. So me thrusting my camera into someone's face was not a problem. And using a film rig made them think they were in a Bollywood production.

One item that I have not so far mentioned is my GPS adaptor. With this attached to my Canon wi-fi adaptor all the shots were geo-tagged. This is very useful for stock images and also for positioning them on the map afterwards. I couldn't fit this adaptor onto the DSLR rig, so some shots were missing GPS data. But this can easily be copied using Bridge or Expression Media.

By the end of the trip I had gathered about 800 stills and 800 video clips. After a while, one temple does look rather like all the others, so it was important to log everything as I went. I used Microsoft Expression Media 2 to log and review all media, still and video. I could annotate all images and write back the data to the file so that when I uploaded back at home everything would be ready to edit. I deleted all files from my cameras every day. This is a touch risky, but made the daily logging more straightforward.

All of the gear worked well and I did not desperately miss anything. Towards the end of the trip my 5D mark II developed what looked like scrambled egg inside the LCD, but it was fixed within three days by Canon Professional Services on return.

All of this has shown me that professional-quality stills and video can be captured by one person on the run. I don't expect my weddings at home to be much like those I encountered in India, but the experience of working at speed with what is available was certainly valuable.


Please Note:
There is more than one page for this Article.
You are currently on page 3 Contact Stuart Barry