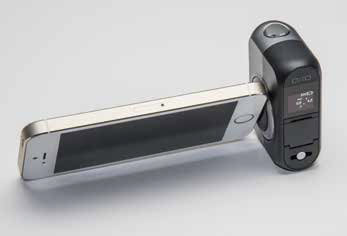 Every now and again something crops up in the world of technology that causes a stir and wakes journalists from their slumbers. These are the gizmos that we talk about in the office, show around, take to the pub to show our mates! The DxO ticked all of these boxes!

The iPhone has a really nice screen but Apple have spent a fortune making the phone thinner and thinner. This is a technical problem because the back focal length, the distance behind the lens, is correspondingly tiny and getting smaller. Thus the light has to bend through incredible angles to reach the sensor. The focal lengths of the lenses are proportionately tiny (approximately 4mm) and the sensor sizes are typically between 1/4 and 1/3 of an inch (6 to 8mm).

Despite these technical hurdles, the modern phone camera has proved to be popular, almost ubiquitous - just look at a wedding scene to see a forest of phones held high over the users' heads and thus wrecking the pro's shots coming in the other direction. The quality of phone images is poor but this does not prevent them from being distributed via phones and hungrily downloaded. By definition, the punter's wedding shots hit Facebook ahead of the official images. Despite the remarkable engineering, the camera phone is close to its limit, the pixels are now approaching significant portions of the wavelength of light and no more can be cheated from the physics!*

*Apple spend between $7 and $13 for both the front- and back-facing cameras. For the iPhone 5S the costs are as follows:
Total manufacturing cost $199
Display $41
Cameras $13
Wireless facility $32

Although it was an extremely dull day this near full- width shot reveals plenty of detail in the housing.

This then is the arena into which the DxO has burst. In essence it takes the screen, the iPhone's interface and computing power and then bolts on a device which overcomes the short-length-optics issues and all its constraints. The DxO can accommodate a 1-inch sensor - that's nine times larger than an iPhone. It is also 50mm front to back which is about seven times more than an iPhone. This enables the DxO to pack 5,540 x 3,688 pixels creating a 40mb+ file in Photoshop which translates to an 18x12- inch print at 300ppi. These pixels are illuminated by more conventional optics without too many light-bending tricks being employed - even so, the smart phone tricks to enhance ISO sensitivity have been added to the DxO*.

* CMOS BSI - This is the camera technology taken from the iPhone. BSI Back Side Illumination puts the photo diode detector right underneath the microchip lens rather than below the interconnection wiring and thereby squeezes a bit more sensitivity