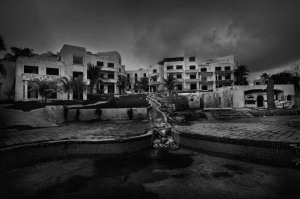 Urban exploration, often known as Urbex is the exploration of man-made structures, usually abandoned ruins. Photography and historical interest/ documentation are heavily featured in the hobby. Although it may sometimes involve trespassing on private property, this is not always the case and should be of innocent intention with only one rule - 'take nothing but photographs, leave nothing but footprints'.

The great thing about urban exploration for me as a photographer is the fact that it is totally uncontrollable; you are stepping into the unknown, what's around the corner? The only way you will find out is by looking. For me being a photographer is more about experiences than taking photographs; the photograph is just the by-product of the experience you either created or put yourself in. As a wedding and portrait photographer, most of the work I am involved in is very set up and planned. What will happen during an explore can never really be planned because you simply just don't know what might be on offer, let alone whether you will get in or not.

Over the past five years I have explored derelict factories, offices, houses and my most recent explore was a derelict hotel in Cancun, Mexico. I use Urban Exploration as a form of escapism. It gives me the chance to break away from my comfort zone in both photography and life. 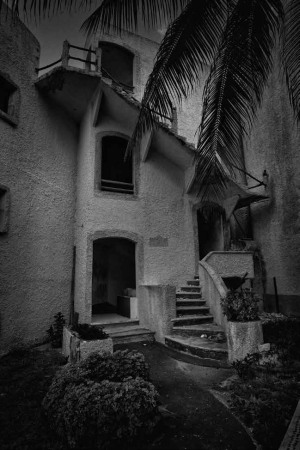 I was in Mexico to photograph a wedding, I hadn't really thought much about anything other than the wedding and general sightseeing. To my amazement when I arrived at my hotel there was a derelict hotel next door. Wow, was this going to be my first explore on foreign soil?

All I could think about was getting in there and checking it out; the fact that my balcony overlooked this old hotel didn't help take my mind off it either.

I knew I didn't have long in Mexico so needed to act quickly if I was going to get in there and check it out. On the second day I grabbed my camera and made my way to the front entrance of the hotel. When I got there I could see it was fenced off and it had signs up warning that it was private property. As soon as I saw this I started to get the buzz and the mixed emotions that run through my mind just before I enter a derelict building. It's these emotions that drive me - fear is the strongest, so much stuff races through my mind. I'm in Mexico I don't speak Spanish and I don't want to get in any trouble, especially before the wedding I have to shoot. There would be nothing worse than getting arrested for what most people would consider 'being stupid' and missing the wedding.

I walked away at first, I needed time to think, was this really worth it? Later that day I decided to go back and have another look; the main entrance to the car park was accessible so I walked in, making sure my camera was in plain sight so if somebody did see me they would have an idea of why I was in there. I wandered about the car park and looked through the fences, it looked amazing inside. I took a few photos through the gaps in the fence knowing that this was not good enough and wouldn't class as an official explore in my mind. I could also see a load of toilets grouped together on a patio, but didn't have a long enough lens to capture them well.


You are currently on page 1 Contact Richard P Walton