These two pages illustrate a trick that has been around for some years. Doubling the size of a camera chip is very costly. The manufacturing process is such that doubling the chip area is likely to cause much more than a doubling of the manufacturing failure rate - figures of tenfold have been talked about. In addition, a camera with a double size of chip would need to be physically much larger and the lens designs would have to incorporate a larger field coverage. The trick that has evolved is to use a shift lens and make images at either end of the shift range.

Thus a Nikon 24mm shift lens, with an 11mm shift capability, can image 11mm either side of the optical axis, to create an additional 22mm of 'film plane' size and a near doubling of the total pixel count. Everything has to be shot in manual mode from a sturdy tripod, and the technique is of little use for moving subjects such as people or clouds in a landscape. 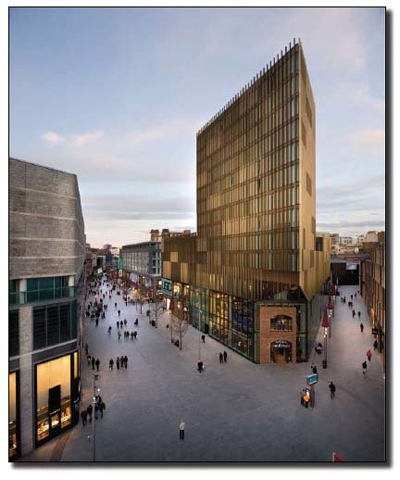 Two examples from architectural specialist, Paul McMullin, are shown. One of the new Liverpool Echo Arena and the other the new Liverpool One development. The second shot is destined for the front cover of Liverpool One, The Remaking of a City by David Littlefield, which is illustrated by McMullin and to be published by Wiley. This was shot in three sections, before stitching in Photoshop. As with so many shots of its type, some retouch work was required to clean the scene up a bit (men in high visibility jackets etc!). Visitors to the Convention will have seen Paul's print in the 16x20 exhibition, where is was one of the highest scoring images.

More of Paul's work may be seen at
www.mcmullinarchitecture.com a site hosted by www.layerspace.co.uk
(who also have some special offers for Society members).
See also www.realviz.com for Autodesk Stitcher.